Today’s question comes from a Videographer in New Zealand who wants to know which lens adapter I recommend for the Sony NEX-FS100 so he can use the Minolta lenses he already owns.

Hi Shawn,
Just saw your post about lenses on DVinfo.. and wondered what adaptor you use for your Minolta lenses to the FS100? I realised I had an old Minolta lens and looking forward to trying it out.. 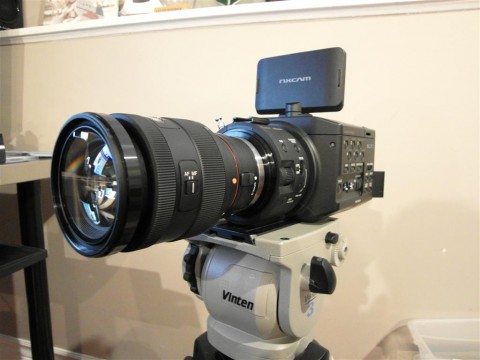 Hi John,
Thanks for your question. As you are aware the Sony FS100 is an E-mount video camera so if you want to use lenses other than the native Sony E-mount lenses (sometimes referred to as NEX lenses as E-mount lenses are used on both NEX digital cameras and video cameras) you have to use an adapter. All adapters do more than just adapt the lens and mount as they all “thread” differently. Adapters also have to add the precise of space amount required so that the lens is the appropriate distance from the sensor. This distance is called the flange back distance.

Dummy adapters have no electronic contacts so the lens has to be operated manually, if this is even possible. Canon EF lenses have electronic iris controls so you cannot change the iris on a modern Canon lens manually – via an adapter ring or a ring on the body of the lens.

Smart adapters add additional functionality electronically. I’ll get to more on this in a moment but let me start to answer your direct question.

You didn’t specify which Minolta lenses you already own but be aware that there are two generations of Minolta lens mounts. The old manual Minolta SR mount (also known as MD or MC mount lenses) are manual lenses and dummy adapter is your only option as there are no electronic controls. You can still control the iris from the lens body, manually focus, and zoom in or out if you have a zoom lens but there is no electronic communication with the lens body so the FS100 will not display what your current F-stop is and you obviously cannot autofocus.

The newer Minolta lens mount is the A-mount. This mount was also produced by Konica-Minolta and now Sony as the Alpha mount. You will often see these lens referred to as Minolta AF lenses: AF = Autofocus.

The A-mount lenses generally lack an iris ring on the body but some third party lens manufacturers like Tokina may have included an iris ring on the lens body. Dummy adapters with iris rings can be used to manually control the iris on A-mount lenses by moving the manual iris post on the base of the lens mount. Autofocus is not available when using a dummy adapter and lens information is not communicated to the body.

Sony currently makes the only smart E-mount to A-Mount adapters. The LA-EA1 allows electronic iris control from the FS100 body to A-mount lenses but the iris changes are not smooth. When you open the iris the lens goes full wide open before slamming into the next F-stop position. So obviously you cannot change the iris with this adapter while filming. I do not recommend this adapter.

I do recommend the Sony LA-EA2 adapter. It is a smart adapter that has a built-in pellicle mirror (Sony calls it a translucent mirror) that allows continual phase detection autofocus (PDAF) and the iris changes are smooth. In addition, lens data is communicated to the body similar to how a DSLR has EXIF data for photos.

I don’t use the PDAF often but there are some situations where it is very useful, such as when the Sony FS100 is mounted on my Kessler KC-Lite Crane or when I am filming a dance solo on a large stage. In both of these situations it would be very difficult to maintain accurate focus manually while keeping the iris between F/3.5 (the most open setting where PDAF will operate) and f/5.6 (which is generally the most closed available light will allow me to film with indoors without using too much gain).

I also find that the LA-EA2 adapter is more precise than some of the other dummy adapters that I have tested so there is no lens play. This isn’t something that affects my image as far as I can tell but it has the potential to introduce unwanted movement at the limits of the zoom range.

Interview on the Sony NEX-FS700 from Streaming Media Producer.

You can also read the transcript of my Sony NEX-FS700 interview here.