This is part five in a five part series listing my picks for the top five video production industry news stories for 2011.

DSLRs that shoot HD video are what many video production companies adopted out of frustration because of the poor video quality produced by the combination of small sensor video cameras and lossy on-board codecs. DSLRs use a massive single photographic sensor, which produce much less noise than a trio of tiny video camera sensors. Because the signal from a large DSLR sensor has more detail and is less noisy, the video recording with the on-board codec produces a higher quality image than a traditional video camera is able to record internally.

Unfortunately DSLRs have many drawbacks. They lack clean HDMI outputs that are required for HDMI recorders. They don’t have professional XLR audio inputs. They have very limited record times and lack simultaneous redundant recording (two mediums at once – like tape and CF card). They lack servo zooms and require three lenses to cover the same focal lengths that a single camcorder lens can. And because the resolution of the photo sensor is much higher than the HD resolution that is being recorded, the DSLR only sample 2/3rds of the video signal and interpolates the rest, which results in aliasing, moiré, and false detail artefacts.

Although the overall video quality of DSLR recordings is better than a camcorder video recording, the main benefit of DSLR video is shallow depth of field video recording, which is not possible on small sensor video cameras. DSLRs enables videographers (some prefer the term filmmaker), to attain a “film-look” through the use of selective focus and buttery-soft bokeh (out of focus background).
Panasonic launched the AF100 and Sony the NEX-FS100 – both large sensor video cameras – in order to compete with DSLRs. Large sensor video cameras bring back many of the above features that DSLRs lack – including one with a servo zoom lens option – the Sony F3 has a single power zoom lens option. I prefer the FS100, mostly because the Panasonic has a smaller sensor and has a ridiculous 2x crop factor, while the FS100 only has a 1.5x crop factor. A 2x crop factor turns a 50mm lens into a 100mm lens, in terms of full frame or 35mm equivalence, a 1.5x crop factor only results in a 75mm equivalence. While this is useful on the telephoto end, a high crop factor limits the wide angle option. 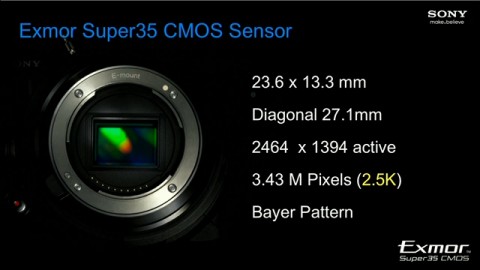 The FS100 sensor has a low resolution, relative to its size

Large sensor video cameras are designed to be video cameras. Their large sensors have a relatively low resolution (compared to photo sensors) but as a result have larger individual photo receptor pixels. They are also a better fit for resolving HD video and eliminate aliasing, moiré, and false detail Most importantly, they allow a shallow depth of field, produce a noise free image, and this results in video quality that is dramatically higher than on a traditional camcorder, even when using the on-board codec.

This concludes my top five video production industry trends for 2011. Do you agree? Comments are welcome.