Have you ever wondered how many people look at your videos?  I’m not talking about the number of viewers who start to watch a video – I’m talking about how many viewers watch the whole thing.  I know I have.  Part of the reason is that for my clients I want to be able to give them some value-added feedback on their videos and suggestions, grounded in quantifiable metrics, about video length and content.

I’ve been frustrated by the most common analytic tools, especially as they pertain to video metrics.  Here are the two most common and why they don’t work:

1)  YouTube.  I’m pretty sick of people telling me that YouTube is the world’s second biggest search engine – as if this means that hosting videos on YouTube is the best practice for business video hosting  – and assuming that people actually use YouTube in the same way they use Google for search.  I’m sorry to break it to you but this ignores sound business strategy and a bigger picture approach to marketing, communication, and viewer-to-client-conversion.  Part of my biggest beef with video sharing sites is that they do everything in their power to entice viewers to watch another video, rather than visit your website.  My dislike for YouTube for business video hosting grows even more when my clients use embed codes to put YouTube videos on their own website.  Why?  Because if the medium is the message then do you really want your business video to be hosted on the same user generated content video host as, well, I don’t even have to name all of the silly things you can find on YouTube and you can understand why. 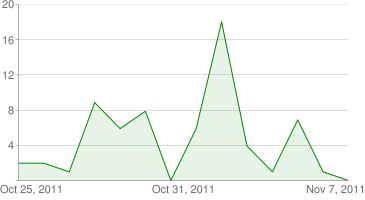 There are several more reasons why YouTube video hosting isn’t good for website SEO but you will have to   read my December EventDV Magazine article on Video SEO to find out why.  But if you want a sneak-peak then you will want to check-out the Video SEO I was able to accomplish that never would have been possible if I used YouTube.

The biggest reason YouTube hosting for businesses doesn’t work is that the metrics reporting, called YouTube Insight, is very limited.  Yes, you can see the demographics (of users who have an account and are logged-in), discovery (link source, limited to from YouTube, external site links, or embedded player on external site), and number of views but In order to really provide value to my video production clients, I need to know more than just the number of viewers – I need to know how much of the video they watched, which parts they watched, which they skipped, and which parts they re-watched.  YouTube can’t tell me that.  All they tell me is the number of viewers.

Update:  Mark Robertson from ReelSEO pointed out to me that I overlooked YouTube Hot Spots reporting – so I investigated why I missed this report, which is part of YouTube Insight.  Hot Spots shows the ups-and-downs of viewership at each segment of your video compared to videos of similar length.  I wasn’t able to see anything in my Hot Spots reports but it turns out I didn’t have enough views and got an “insufficient data” error.  Here is what YouTube had to say about this:

I’ve never really used YouTube as a primary video host but I do have an account and my video with the highest amount of views has 796 views, which is well above the suggested 600 views target for when my Hot Spots graph would become available (the video in question is pre-March 2011).  Most importantly, most corporate videos won’t go viral or even have enough views to satisfy the new lower minimum requirement of 300 views in an entire year in order to gain access to the Hot Spots reporting, so making users wait until 300 views before they can access a report and make changes isn’t really that helpful.  So I still consider YouTube Insight to be very limited.  In the case study video I created and will discuss in the next section, at the time of the writing of this update, I still would not have unlocked the Hot Spots report, despite me considering that over 200 views in 4 days is wildly successful for my goals and the niche nature of my review. 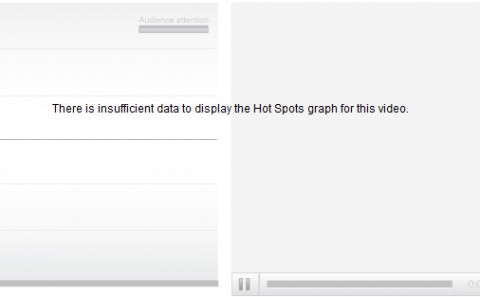 Last week I posted a review of the Sony SAL1650 wide zoom lens on my Sony NEX-FS100 video camera and I tried to see just how much traffic and video views I could generate.  I posted a link to the review on several forums and online social media websites, which caused my lens review and video to be posted on several more.  Google Analytics is really good at telling me the number of viewers and the link source but has a really hard time with the time spent on page.  The reason for this ties into the bounce rate, which is the percentage of viewers who only view a single page, or in other words, don’t click anywhere before they leave your website.  Without a second click, Google has no way to measure how much time viewers actually spend on your website.  So the Average Time on Page metrics they provide only represents those viewers who clicked on a link on your webpage (which, unfortunately doesn’t include video embeds as they aren’t technically hosted by you or part of your website).

Time on page accuracy is limited by the bounce rate

My Google Analytics report for the first four days my lens review was online tell me that the average time on page was 3 minutes and 43 seconds but this only applies for the 12.19% of visitors who clicked on a second link on my webpage (100% minus the bounce rate of 87.81% = 12.19%).  So while this is very interesting, it doesn’t tell me what I really want to know:

How much of the video did viewers watch and which parts did they re-watch or skip?

Google Analytics can tell me that I received 645 unique pageviews and the sources they came from.  The (direct) source appears relatively high (113 views) but many of the locations where the link to my review was posted would not allow hyperlinking of URLs so I’m assuming many of viewers who found their way to my page copied and pasted the link in their browser.  I’m only just getting started on Twitter, but the T.co link at the bottom of the top 10 is a Twitter link.  By the way, here is my Twitter feed.  You can also Subscribe to my public Facebook feed. 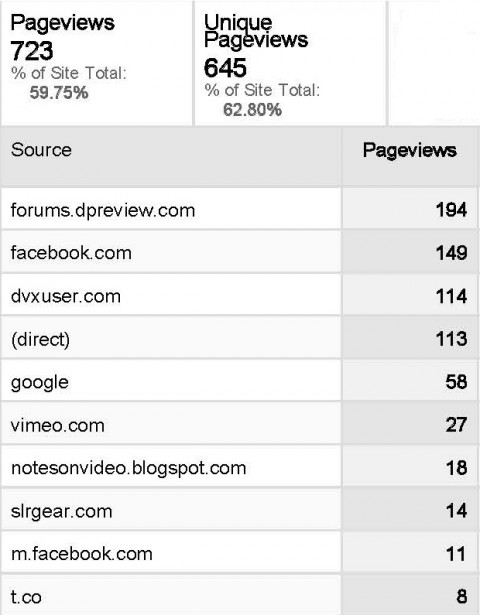 So if I was an average video producer and this was one of my client’s videos, I could combine the number of views my video host was reporting, with the number of unique viewers Google Analytics was reporting, but I couldn’t tell them much else in terms of how much of the video they watched and did it hold their interest.  Fortunately for my clients, I’m not your average video producer 😉

In order to get the metrics that I want, I use Wistia, a professional streaming video host.  Below is the report from my Sony 16-50mm f/2.8 lens review.  In one graph it shows me everything I need to know.  The text below the graph tells me that I had 595 page loads from 439 unique visitors.  Only 49% of viewers actually played the video, which accounts for 220 views, and 81% of the video was watched by the average viewer.  If those were the only video stats I would be pretty happy with the reporting that Wistia provides but let’s have a look at the graph: 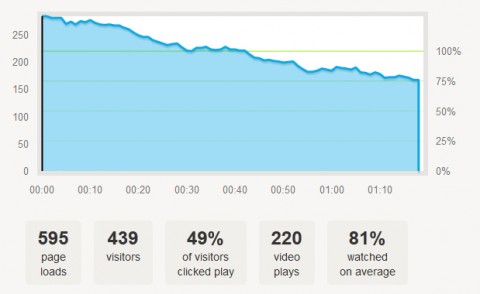 So how do I interpret the results and why does the blue bar exceed 100%?

Similar to TouTube, Wistia uses proper streaming servers that allow the viewer to skip around in the video and the video resumes playing almost instantly if you have a fast internet connection.  Hosting videos on your website host or video sites like Vimeo use progressive download, so you can’t skip ahead in a video beyond the download bar.  Unlike YouTube, Wistia allows you to see what parts of of your videos are played, replayed, and skipped.  So there isn’t a problem with my above graph – it indicates that the first part of the video was viewed on average more than once by each viewer in a single visit.  Or in other words, they “rewound” the video and watched the beginning again.  It also shows that by then end of the video I retained 75% of my initial viewers, which is a very high amount.

Wistia does that too.  I am able to see each individual user, their country, ISP, IP, and their viewing pattern, on a Heat Map.  A Video Heat Map shows me exactly which parts of the video each user watches.  Green is a single viewing and white is not viewed.  Different colours represent portions of the video that were re-watched.  Yellow means two times, orange – three, and red-four times. 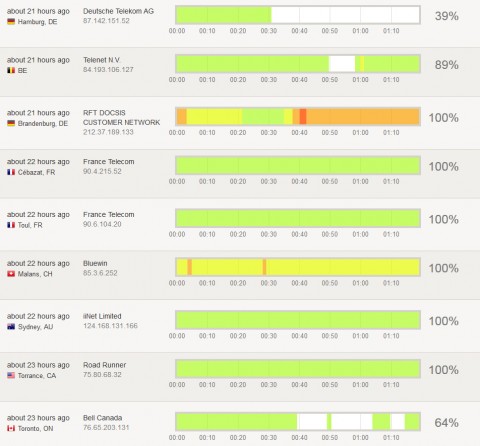 From this report (and an exported CSV of all the users that I was able to manipulate in Excel), I was able to see that my geographic reach was much different than I thought.  I thought my viewers would be located primarily in North America and surely there would be a large chunk from my fellow Canadian video producer friends.  I learned that I have a much more global reach that I ever imagined.  I know everyone is talking about the world being a smaller place, thanks to the internet, but I never realized how small it really is.

Here are some stats from the first 200 viewers of my video on the Sony SAL1650 wide angle lens for the Sony FS100 review:

So the next time you hear a business person telling you that they plan to host their corporate video on YouTube, let them know that they should consider the power of video analytics before settling on the world’s second biggest search engine.  Also, YouTube is in second place but Google is still number one and the goal for video hosting should be to drive viewers to your website, and not to YouTube.  See the Google screen cap below for what I was able to accomplish in a few days on the world’s number one search engine.  Maybe now you will understand that video hosting decisions for business shouldn’t be about what websites are popular but more about which ones will allow you drive viewers directly to your website. 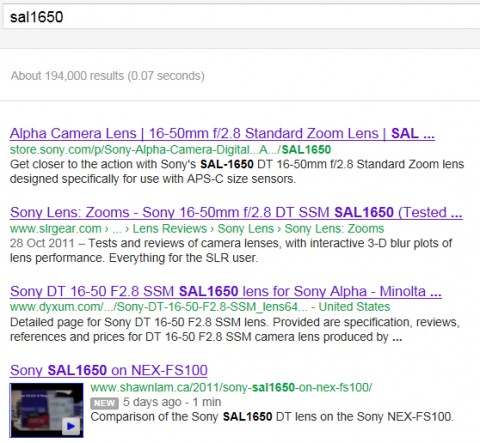