The Sony NEX-FS100 is professional video camera that is a game changer for corporate and event video producers. Traditional professional camcorders use three relatively small CCD or CMOS sensors – one for red, blue, and green. This was fine for SD video acquisition but with HD video production, a small 1/3″ or 1/2 sensor is too small for proper HD acquisition.

In order to acquire an HD image, manufacturers resorted to a combination of smaller photo sites on the sensors and interpolation. Both of those techniques result in a noisy image, which is challenging for the video camera’s video codec. This left a lot of room for improvements and it was a Canon photo DSLR that solved the problem – the Canon 5D MKII. It featured a full frame 35mm sensor and recorded HD video with a shallow depth of field, which is the ability for a camera to have the subject in focus and the fore- and background out of focus. This is also known as bokeh or defocus and is only possible with a large sensor.

This side by side comparison is between the 1/3″ Sony HEX-NX5U and the Super 35mm Sony NEX-FS100. Because they have different internal codecs I captured the uncompressed HDMI output from each of the cameras and recorded them on an ATOMOS Ninja using the 145 Mbps ProRes 422 codec. Notice how flat the NX5U image is. The FS100 isn’t 3D but is as close to 3D as you can get on a 2 dimensional medium. The NX5U image is also very noisy. Just make sure to click on the image to open a 1920×1080 image (and then you might need to click a second time on that image to view it at 100%) 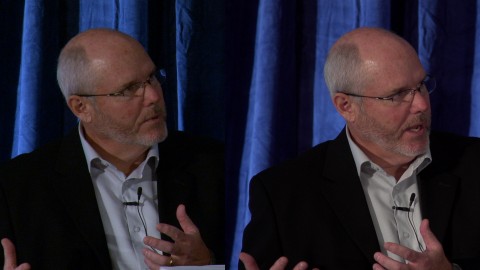 Canon released two additional video capable DSLRs, the Canon 7D and 60D, but all three were limited by short 12 minute record times and the absence of professional audio inputs. Despite this, many professional video production companies made the switch to DSLRs for video production as the benefits of a higher quality image and shallow depth of field were deemed more important than the audio or record time limitations.

In order to compete against Canon’s three video DSLRs (and to a lesser extent, the Panasonic GH2 DSLR), Panasonic and Sony both announced video camera bodies with large sensors that used SLR lenses. The Panasonic AG-AF100 was released in late 2010 and the Sony NEX-FS100 in 2011. Although not as large as the full frame 5D sensor, the AF100’s 4/3″ sensor and the FS100 Super35mm sensor were similar in size to the sensors on the 7D and 60D and were able to produce images with a shallow depth of field.

What made the large sensor video cameras different from their DSLR cousins is that the sensors were not SLR sensors with a native resolution between 10-21 megapixels but rather large video sensors with a resolution slightly above HD video, which is 1920×1080, or 2 megapixels. Having a large sensor with a lower resolution means that the video image is not sampled, like it is on the DSLR, which results in false detail and video artifacts like moiré and aliasing. There is simply too much date on the DSLR sensors and the most dramatic example is on the 5D, which is only able to process 1/3 of the information and throw’s out the rest.

The other benefit that large sensor video cameras have over DSLRs is that they have record times that are only limited by the storage capacity of the memory cards and they have professional XLR audio connectors. The Sony NEX-FS100 is sure to be a top choice for leading video production companies as traditional camcorders and DSLRs are too much of a compromise.

Below is a video example of the Sony NEX-NX5U and the Sony NEX-FS100. The original ProRes file is much more dramatic as much of the noise gets smoothed-out in this web version but it comes at the expense of resolution and there is a lot of ugly pixel marco blocks. The web video is a 6 MBps 1920×1080 30P H.264 file, in case you are wondering, there is no colour correction. Just like the photo, make sure to full screen it. Which image would you rather have?