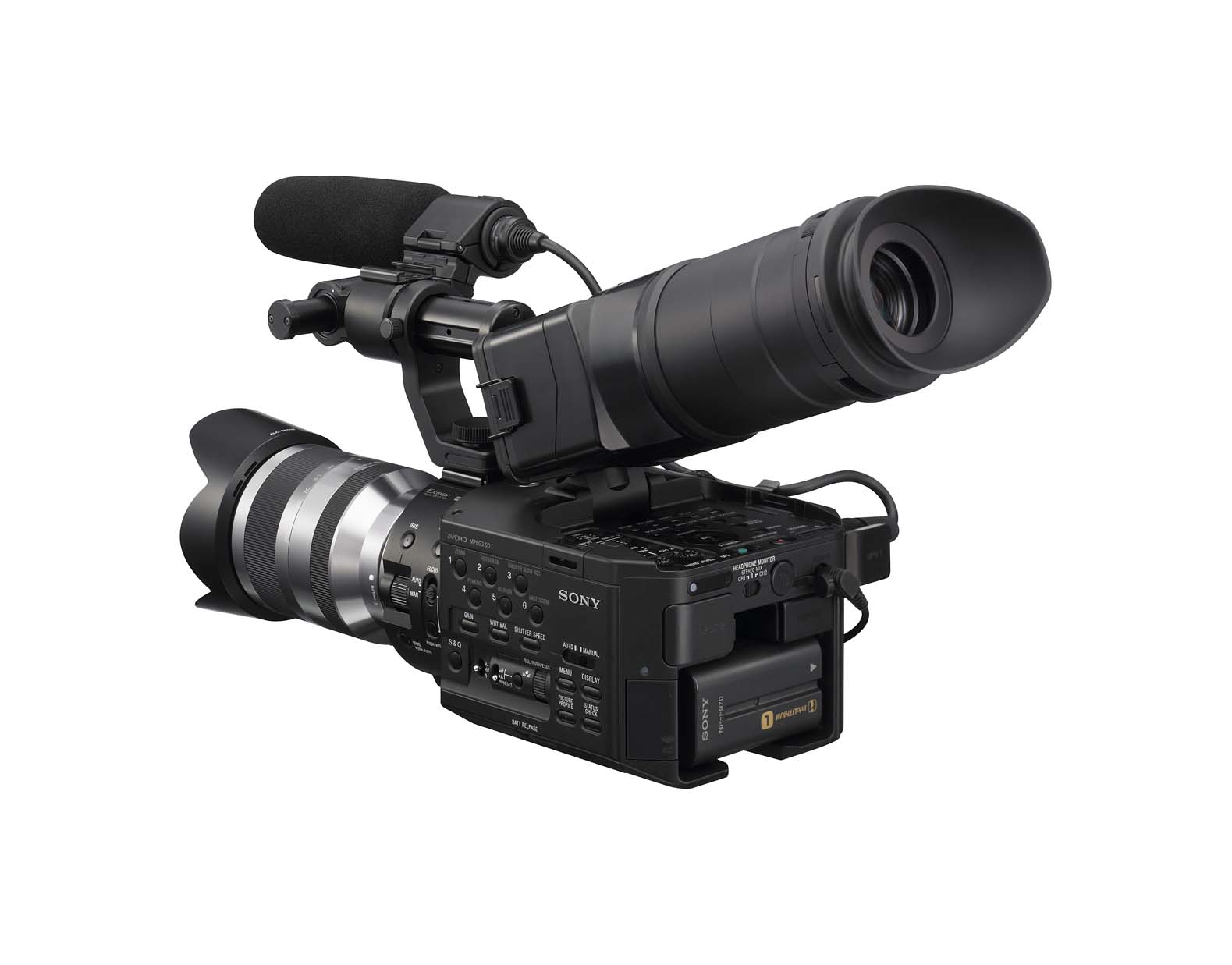 I’ve been waiting for this camera ever since I first heard of DSLRs being used to produce professional video. Well, now it’s here – or at least a couple of working prototypes, along with specs to pour over in anticipation of this next generation of video cameras. So until I get my hands on a production unit (I’m on the list), I’m going to provide you with a hand-off review of what might very well be my next video camera.

So what’s the big deal with this camera and the entire line of new 35mm Sony video cameras, including the PMW-F3K and CineAlta F35?

It all comes down to the sensor size, which in this case is a Super 35mm CMOS sensor. A larger sensor allows lower light sensitivity, beautifully saturated colours, and most importantly, a shallow depth of field, or Bokeh (Sony also refers to this as “defocus”). It is this missing element that has prevented filmmakers from producing a “film look” on video cameras as no matter how hard they tried with expensive long lenses and an open iris, achieving a bokeh effect where the camera operator is able to select both focus and defocus, was always limited by the relatively small sensor size of the video camera.

By comparison, my current video camera, the Sony HVR-Z7U has 1/3″ CMOS sensors, which is about 6mm diagonally. A 35mm sensor is over 5 times larger, with a diagonal of 31.1mm, and that makes all the difference. 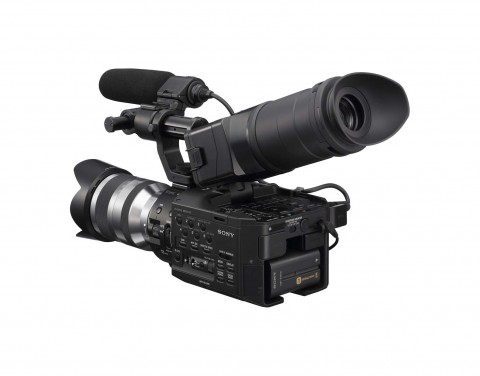 Now I’ll leave it up to you to visit Sony’s FS100 page to get an overview of the specs but what I wanted to do is to discuss a few of the elements that I feel always get left-out of the typical online reviews that focus on the big specs but don’t spend much time considering the video camera from the perspective of the video camera operator.

The answer is 60. What this means is that if I was to drop the 60P footage on a 24P timeline, I would get an instant 2.5x full frame slow-motion. Pretty cool, eh!

The next big feature is something seemingly very small, but one that I started advocating for in my 2008 Sony S270 article. The feature is solo or ISO audio for the headphones and it allows the camera operator to isolate one of the two XLR inputs on both ears, instead of the standard of channel one in the left (or both) and channel two in the right. Solo audio monitoring is critically important in the live environment to be able to monitor for clean audio and detect audio problems because it is much easier to close one eye than it is to turn off the hearing in one ear – now you don’t have to plug an ear to critically listen to a single audio input.

The battery is the Sony L-series battery – the same one I have been using on all my Sony video cameras since my first VX2000 in 2001. I like this because I don’t have to invest in a new set of batteries that don’t work with my legacy equipment (like EX1 and EX3 owners had to).

One of the new (when compared to the NXCAM line-up and DVCAM/HDV predecessor line-up) buttons on the FS100 is the S&Q button. This stands for slow and quick motion and I understand it to be the equivalent of over or under cranking.

On the top of the camera is a GPS logo so it looks like geo-tagging is possible and location will flow through on the metadata. I don’t know where I would use this feature in my business right now but there is a cool factor to being able to automatically sort footage based on location.

On the I/O side there is an HDMI output that is a respectable 4:2:2 for those that want to record a higher bitrate version to an external recorder (Aja Ki Pro or Mini, Matrox MXO2 Mini or ATOMOS Ninja) for green screen work or when an uncompressed (or a lot less compressed) version is required. Composite video from full sized female RCA connectors has returned (which I also advocated – it was last seen on the DSR-PD170). Unfortunately the component video out is from a proprietary DIN connector, which offers male RCA type connectors. I much prefer female connectors so that I can use a single cable to connect the camera to anything that is more than a foot away. With a DIN connector on one end and male RCA on the other, you can’t avoid using both an adapter or two and a cable to be able to use this output for anything, other than an on-camera monitor.

What remains to be seen is if Sony has limited the camera with a connection priority limitation. This was first introduced on the Z1U and it limited the number of connections that could be used at a time from 2 (or three on the Z7U/Z5U, with the addition of HDMI) to one. I find I often require multiple outputs when I’m filming live switch events – don’t even get me started on the need for simultaneous SD and HD outputs.

I noticed a LANC style connector, labelled Remote, on the back of the camera. Wouldn’t it be great if I could still use my old Manfrotto 521 & 523 LANC controllers for zooming in and out? I can with the manual interchangeable lens on the Z7U. EX1/EX3 users had to purchase a new controller to regain this functionality.

Update: The LANC can be use only to start and stop the recording. SLR lenses do not have servo zoom capabilities and currently there are no smart adapters for ENG lenses with servo zooms.

The stock lens that comes in the FS100UK configuration (the FS100K denotes a bare camera body with no lens) is an 18-200mm F3.5-6.3 E-mount lens. This translates into an 11.1x zoom, slightly less than the 12x on the Z7U and substantially less than the 20x on the Z5U/NX5U, and while the F3.5-6.3 lens is considered slow, the sensor size makes-up for a lot of lost ground. The effective low light sensitivity is 0.28 lx (1/30 shutter, IRIS F1.4, Auto Gain), which is an improvement over the HVR-Z7U rating of 1.5 lux (auto gain, auto iris, 1/30 shutter). The lens also has built-in optical image stabilization (OOS), a feature not available or is very expensive on DSLR lenses. 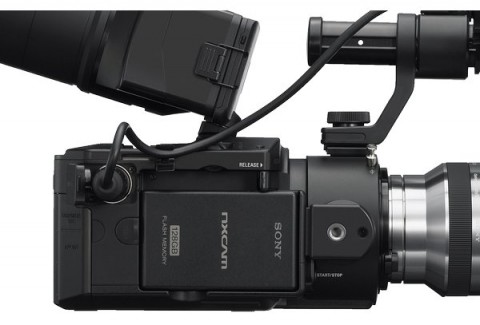 The body of the FS100 is very modular, with a removable LCD magnifier, hand-grip, and shot-gun mic holder. This is a nice touch but the inclusion of several 1/4″ and 3/8″ screw holes makes the modular nature of the camera very useful as accessories can easily and securely be added.

The FS100 has three recording options:

I can’t tell if two or more of the recording options can be recorded to simultaneously to either extend record time or serve as a back-up. I hope so. I am glad an SD record mode was preserved as SD is still relevant in many markets.

Update: You can record to the media in the lone card slot and the FMU-128 simultaneously but you cannot have one automatically start as one is full and there is only one card slot.

The last area I wanted to discuss in my “hands-off” review of the Sony FS100 is the USB out. Sony lists USB under their inputs/outputs section. I can’t tell if this is for video out – it only lists the connection type:
mini-AB/Hi-Speed (x 1)
If the camera did allow for USB audio and video out, much like does Roland’s new VR-5 video mixer does, the FS100 could be easily be used for high quality single camera webcasting.

Update: The USB does not stream live video and can only be used to transfer pre-recorded files off of the media when connected to a computer.

Well that concludes my initial look from a distance at the potential behind Sony’s new entry level professional video camera. For my requirements, it looks to be a winner. So for now I’m going to hold-off any further DSLR investment until I can get my hands on the FS100 and see if it is as good in my hands as it appears on paper.