Update: Shawn Lam featured in The Tri-City News December 9, 2009 edition – high profile clients closing their Canadian operations, at the cost of 1,000 local employees early in the year, Shawn Lam Video experienced growth in several of the business metrics that I track, including # of projects, # of DVDs produced, and business profits.  Although these stats are always top-of-mind when they happen, they won’t be as important when I’ve surpassed those levels in future years so I know that in retrospect I’ll remember 2009 for the following reasons:

1 – After 5 terms as President of the BC Professional Videographers Association, I’m stepping aside and John Romein will be taking over the leadership role.  I’m looking forward the extra time in order to spend more time with #2.

2 – Amanda and I are expecting our first baby!  Our boy is due January 13 and we couldn’t be more pleased.  So while technically he’ll be born in 2010, 2009 will be the last year that Amanda and I have tremendous amounts of freedom.

3 – And finally 2009 will mark the third consecutive year that I’ve received a major video production award.  In 2007 I received an Artistic Achievement Award, in 2008 I received a Creative Excellence Award, and in 2009 I received the BCPVA’s highest honour, the Distinguished Service Award.

The BCPVA Distinguished Service Award is in recognition for my contributions to the video industry.

Here is what is written on my award:

Shawn has represented the BCPVA proudly since joining in 2002 and has served 5 terms as
Association President.  He has won both a Creative Excellence Award and Artistic Achievement Award.
In 2005 he earned the Merited Professional Videographer accreditation and is a 5 time international
video convention speaker.  Through his work as a contributing editor for EventDV Magazine,
Shawn is one of the most sought after video industry personalities and product reviewers. 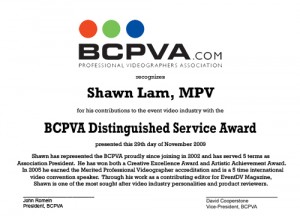 In the presentation of the Award, BCPVA Vice-President David Cooperstone delivered this speech:

12 months ago I was sitting in the audience listening to Shawn Lam speak the praises of my long video career and accounts of my contributions to the industry.   Following his speech he recognized me with the BCPVA’s highest honour – the BCPVA Distinguished Service Award.  Previous recipients include the BCPVA’s founder, John Porter, and Danny Sayson, who is the winner of over 10 international video awards, was twice named to the EventDV top 25, and most recently was renewed for a second season with his locally produced TV show on PBS, West Coast Adventures.

Tonight it brings me great pleasure to be the one to recognize Shawn Lam with this very same honour.

Those of you that know Shawn can see how he is different from most of his video peers in that he is a business person first and artist second.  This gives him a unique perspective in the industry and is one of the reasons he has been so successful.

In 2001 Shawn and his brother Greg broke into the video scene with their auspiciously named company Intergalactic Digital Productions.  They joined the BCPVA in 2002 and in very little time it was obvious that Shawn was going to be a leader in this industry.  In 2003 Shawn joined the executive as marketing manager, started a new company – Shawn Lam Video – and in 2004 served his first term as President of the BCPVA, a position he has held for five terms.

During his tenure as President, the BCPVA underwent a lot of changes thanks to his leadership.  He formalized the membership structure, led a branding redesign, arranged for supplier discounts, re-wrote the BCPVA Code of Ethics, and over the years has led many of the BCPVA members into developing a more strategic and diversified business focus.

Outside of our Association Shawn has been a featured speaker on 5 occasions at 2 different international video conventions.  He is a writer, reviewer, and contributing editor for EventDV Magazine and in only 3 short years has written over 30 articles, columns, and product reviews, including representing the entire video industry with his WEVA 2008 article and most recently, and on the other side of the camera, for his 2009 WEVA video report on EventDV-TV.

Locally Shawn is an instructor for BCIT’s filmFlex Program and his class is The Business Plan and Career strategies – the capper course in an intensive and expensive, training program with the mandate of educating the next generation of independent video producers.

Shawn’s accomplishments in his video business are equally as impressive as his contributions to the industry.  He was one of the first recipients of WEVA’s Merited Professional Videographer Accreditation and he has won both the Artistic Achievement Award and Creative Excellence Award.

Most importantly Shawn runs a very successful video production business in our local market servicing the niche markets of Dance Recital Video Productions and Corporate Communication Video Production.  Although being local has not restricted his work locations as Shawn has been hired to work in Belgium, Mexico, California, Denver, Florida, Ohio, Washington  – to name but a few.

Now the most impressive thing about Shawn and his accomplishments is that he is only 32.  And while at the outset it might have seemed premature to honour a man so young for his contributions to our industry after only 8 years, when you understand the impact he has had on not only our local association but the international video community as a whole, you will see why it is fitting that tonight we honour Shawn with the BCPVA Distinguished Service Award.